The goal was to change the dirty covers, plump the cushions up a bit and have a nice sofa for staging and beyond. The first time I've sat in front of a machine in a long time, I really miss it. 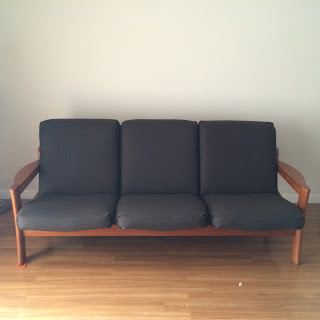 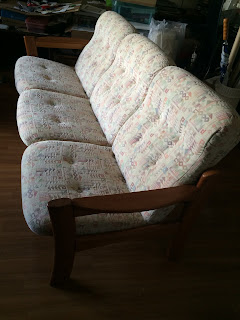 I even tried to keep the original covers, they were much improved after washing, but between shrinkage and restuff ing,  they were way too small.  They will be re cycled into cat bed material.  The top is the dirty example the bottom is clean, and the colors pop now, lucky kitty. 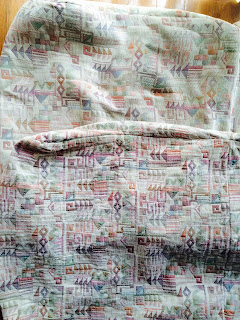 In the end, I kept the original foam  which was in good shape, and wrapped it in two types of batting.  One cushion wrap, which is thick and stiff  the other was the final wrapping with soft n crafty, both available at Joann's. 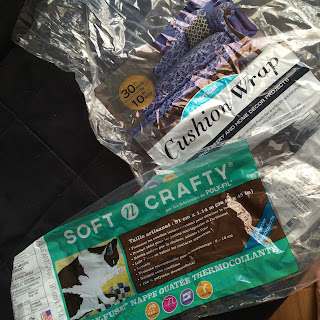 Instead of drafting a pattern, the cloth was draped over the cushions, marked, and reproduced two times to complete the seats. 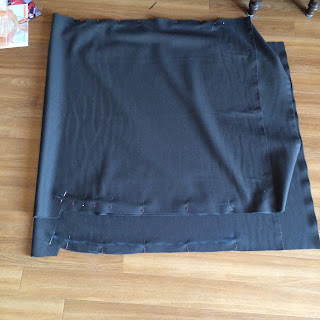 Here are some in process pics, stuffing before and after. 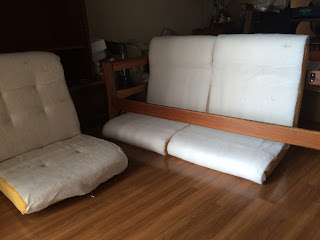 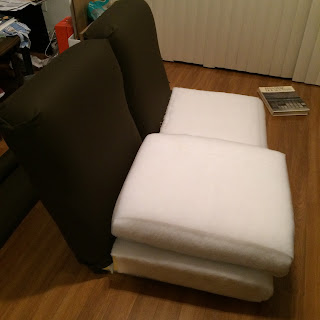 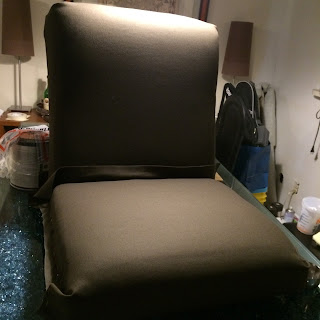 This project was aprox $90, with fabric from Boca Bargoon's moving sale (chocolate brown wool flannel), the batting from Joann's, purchased with coupons, and the 3m super 77 adhesive used to keep the batting from shifting.

It's good to have the cushions installed in the frame again, so the living room is beginning to get its dignity back. Time to celebrate with a little couch potato Netflix binge watching, before I get back to painting ......

If I were a professional painter I would not make any money.  After sanding down the cabinet doors I had an epiphany and tried using painters tape to keep the paint from collecting in the lip. 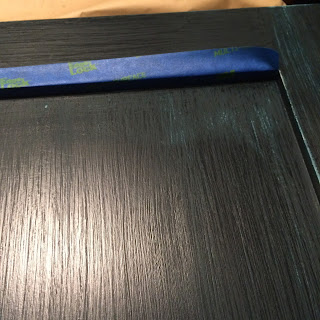 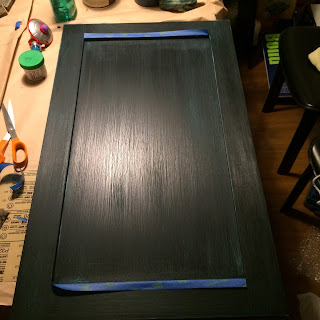 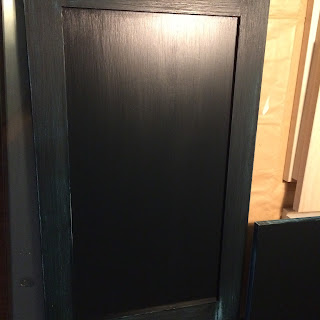 So far so good but completing the doors section by section is going to take longer to complete, and use more paint. So patience is the key, they need to be left to dry completely.  No rest for the wicked, I will start the top doors. 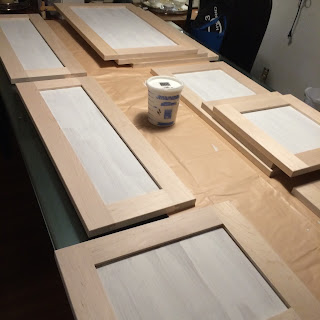 Meanwhile back at the house, the one section  that we had decided to leave as is, is being demolished.  The damage to the wiring is such that if we keep it, the electrician will not be able to reach the wires to the corner flood lights, or the patio ceiling fans.  The other benefit, is that we can now use spray in foam to insulate the entire house.  Electricity isn't cheap here so efficiency will pay for the upgrade. 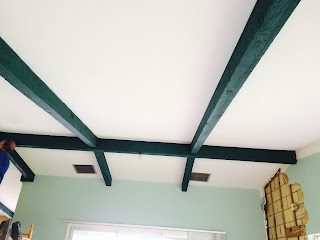 At least we haven't dropped any, but lowering these monsters from a wobbling platform is not for the faint of heart. 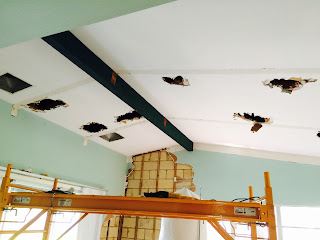 Marking the beams and placement. 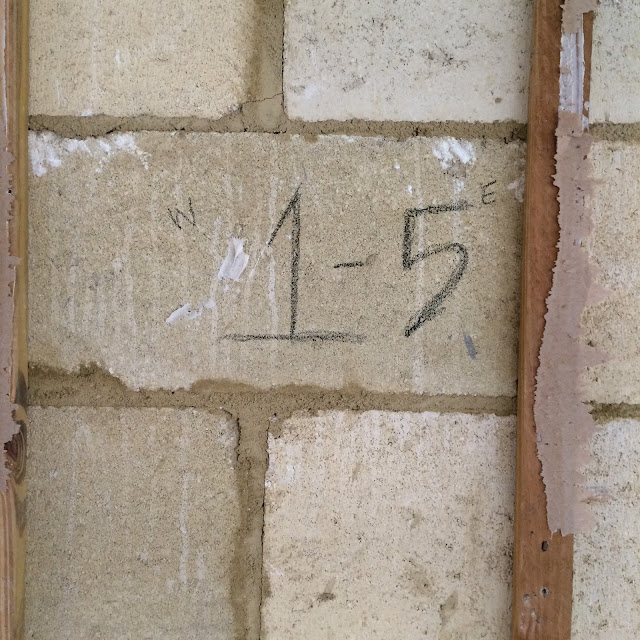 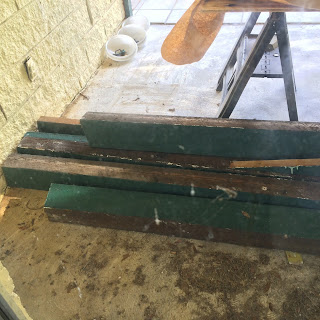 The beams are solid cedar which are pricey to replace, we will paint these a chocolate brown and install them again.  We will need a plan for how to do this, since the beams were held by lug bolts and installed after the drywall was installed.  There is very little space between the roof deck and ceiling, it is a mystery.

Here is a lovely color from Farrow & Ball, called Blue Black, this looked fantastic next to the tile sample when I took it to the showroom to pick the colors. 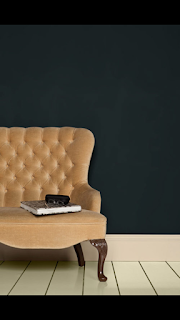 After taking the doors to three different painters no one wanted to touch the doors.  Finally, one told me that with the center mdf panels, he wouldn't touch them  The mdf takes paint at a different rate than the maple frame.  Also, he said it would be better to get solid wood doors, because they flex at the same rate.  The mdf center panels on these doors would result in cracked inside edges.  Now I know for next time.

He recommended that I prime the center panels first, then prime the entire door on the second round.   I used the F&B undercoat and primed.  I was so relieved that this went well. 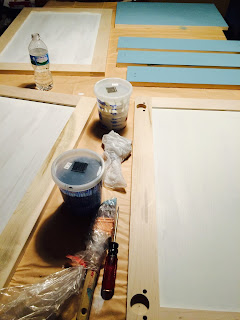 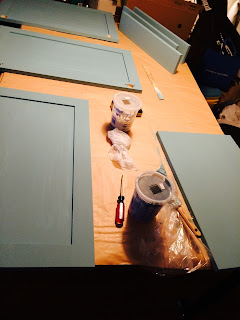 Next up was the final paint color. No good. The paint is streaky and lumpy and disgusting.  As the final insult, I waited the suggested drying time, although they say dark colors take a bit longer.  36 hours later, it's still tacky, it gums up my sandpaper.

Even after 48 hours they were almost there.  They were painted in 74° 50% humidity.
This shouldn't be happening. Fortunately the second coat didn't take as long. 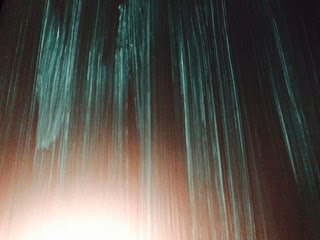 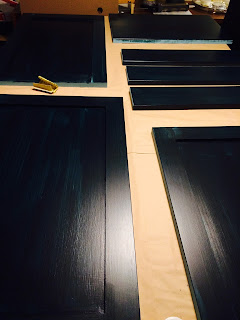 Sanding and a third coat is next.  The brush strokes are very pronounced so they need to be smoothed out. These are the bottom kitchen cabinet doors, once these are finished we can install the counter, hook up the sink and the corner carousel.  There's a lot riding on these doors.

Looks like patience is required for this project, stay tuned.
at 1:47 AM 2 comments: