My Wolf dress form is a size 8, what does that mean?  It's measurements are 35" - 26.5" - 37", there used to be a time when it was too large for me, not any more.  When I took my moulage class with Kenneth King I created a cover that was used to stuff the dress form.

Held in place by sticky clear film used for wrapping boxes.  This was done for two reasons, one was to keep the batting fibers from getting stuck in the zipper and the other was to help mold the and reinforce the shape of the dress form.  In some areas there is a 6" difference. It worked at the beginning but after a time the batting shifted and crushed and no longer resembled my shape, (even though it was close in dimension).  So I found another dress form closer to my size, and restuffed her.  This time, I would need less batting and tried to follow the natural curves of the underlying dress form.  I draped the batting over the dress form, complete with hand basted darts, 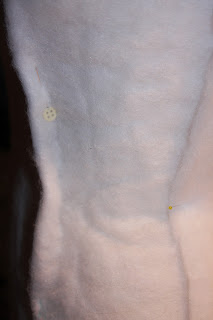 The darts are trimmed and opened 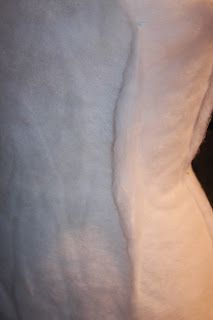 The batting turned inside out. The cover slipped on again and voila something closer to my shape.  On the first version the shoulders sloped too much and would require further adjustment on me.  What I really need is pads for the arms which will come further down the road.

Jacket progress has been slow but hopefully I'll be able to get back to them soon, here's a teaser of what's been done so far.